The Notecard CLI is a command-line utility for interaction with a Notecard connected directly to a computer over USB. It is meant to serve as a development and debugging aid as you build Notecard-powered applications. 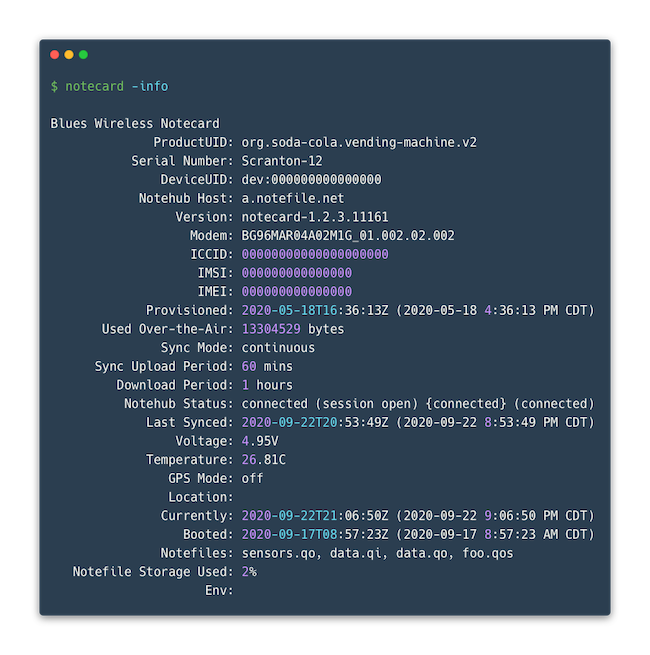 Use the Notecard Playground to interact with your Device

This site provides an in-browser terminal that emulates much of the functionality of the Notecard CLI. Access the terminal via the Notecard Playground or the expansion button at the top right of your screen, assuming you're using a supported browser (Chrome, Edge, or Brave).

To install the Notecard CLI, visit the releases page of the note-go repository and download the binary for your operating system. Extract the notecard utility and place it in your PATH.

Alternatively, if you have Go and the Go tools installed and want to build from source, you can clone the note-go repo and build the Notecard CLI directly with the following commands:

Once the Notecard CLI is installed, use the notecard command to view available arguments, as well as a list of available serial ports detected by the utility. 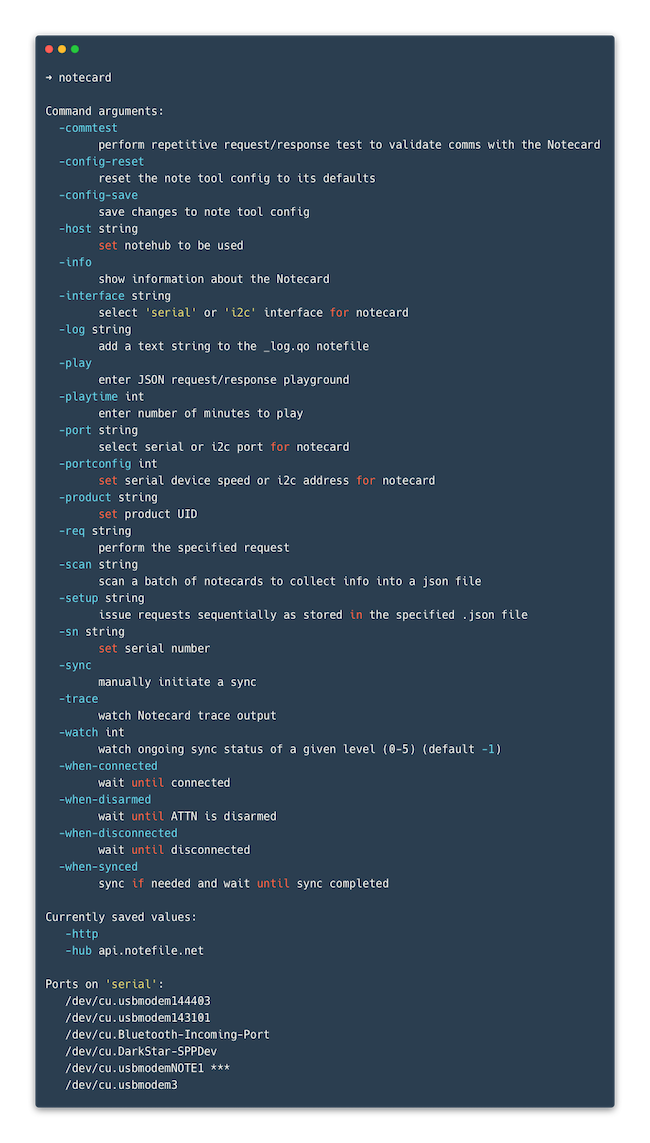 The Notecard will show up as tty.usbmodemNOTE1, ttyACM0, and COMx on macOS, Linux, and Windows respectively. The three asterisks (***) next to a device name indicates the default device that will be used, if the port flag is not provided.

If the CLI detects a single Notecard available via serial, it will issue all of the commands below directly on that device. If you have multiple Notecards connected and wish to specify a serial port, use the port flag, followed by the device address for your OS.

The rest of this guide details a number of common CLI commands.

Use the info flag to obtain a view of Notecard configuration, network state, sensors, and onboard storage.

This command returns a formatted view of data.

To make a single request, use the req flag, followed by the full JSON request string, as outlined in the Notecard API Reference.

This command sends the specified request to the Notecard and returns the result.

If you need to issue a number of requests to the Notecard, you can also use the play flag to enter interactive mode. In this mode, the Notecard expects direct JSON requests and returns JSON responses. Note: This is the same mode supported in our in-browser terminal and the Notecard Playground. 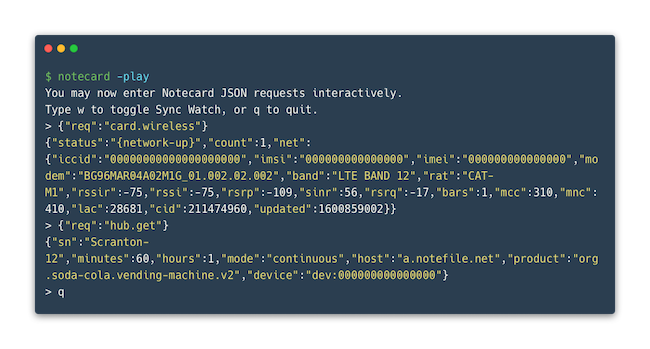 Set the ProductUID and Serial number

The product and sn flags provide a shorthand way to set the ProductUID and Serial Number on the Notecard. Both flags issue a hub.set request to the Notecard.

To manually initiate a sync between the Notecard and Notehub, use the sync flag.

To trace the Notecard's activity, use the trace flag. This mode is similar to play in that it accepts interactive JSON requests, but also outputs trace messages from the Notecard.

You can instruct the CLI to send a series of requests to the Notecard with the setup flag. This command is useful for simplifying some of the Notecard configuration requests across a number of similar devices.

The requests should be defined in a file with a .json extension and a request on each line of the file. For example, the following script contains a series of requests for configuring the Notecard as a standalone asset tracker:

Then, use the setup flag and the JSON file on each connected Notecard:

If you need to output device details or certificates from a single or batch of Notecards, you can use the scan flag, followed by the name of a file in which to output details. When run, the Notecard CLI will create the output JSON file, and a CSV file containing the DeviceUID for the Notecard.

scan can be used with multiple devices in sequence, without rerunning the utility.

When used together, scan and setup allow developers to quickly configure a set of Notecards for deployment.

Provisioning a Notecard with an Alternative Embedded SIM

If you are working with a variant of the Notecard that uses an alternative embedded SIM from a partner (for example, Twilio), you'll need to perform an additional provisioning step to ensure that the SIM on your device is properly registered with that carrier. You can do so with the provisioning flag, which embeds a token for your carrier onto the device.

As an example, for Twilio, your provisioning token is your Account SID and Auth Token, separated by a colon. This flag can be used with scan and setup to provision multiple Notecards at once.