The Notecard and Notehub provide developers with an over-the-air device firmware update (DFU) mechanism that can be used to update Notecard firmware, or the firmware of a connected microcontroller or microprocessor host. Provided the host has the ability to run a custom bootloader or operate across partitions, developers can utilize Notehub to upload firmware binaries, and the Notecard to download and deliver those binaries to the host.

Host DFU is available to any processor type that has the ability to update itself from a binary. And while the interactions with the Notecard and Notehub, are consistent across processors, the actual firmware update process is host-dependent. This guide specifically covers the host DFU process using the ESP32, which leverages esp-idf libraries and the ESP32's built-in partition scheme to update its own firmware while operational. For a more processor-agnostic summary of the Host DFU process and the Notecard API requests involved, see the Host Firmware Update Requests document in the Notecard Walkthrough.

A complete example of the ESP32 Host DFU process can be downloaded from the note-tutorials GitHub repository. The directory contains the 1.0.0.0 and 1.1.0.0 versions of projects covered in this guide.

To follow-along with this guide, you’ll need:

When performing an ESP32 Host DFU, you’ll want to make sure you’re running at least version 1.8.13 of the Arduino IDE. The ESP32 self-updates through a partition scheme, which allows the device to swap to a secondary partition in order to update the first at runtime. After selecting an ESP32 board from the Tools > Board menu, set the Partition Scheme to "Default." The other built-in options reduce the secondary partition for large primary apps and cannot be used with Host DFU. 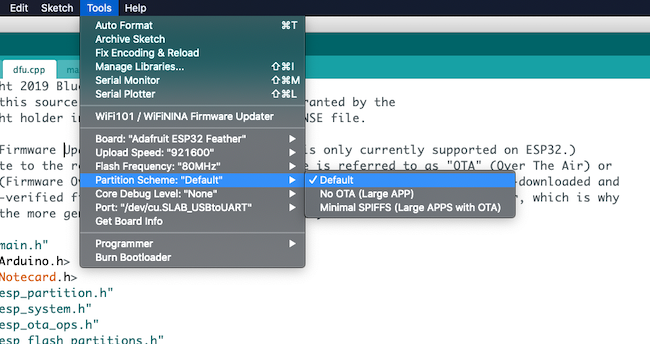 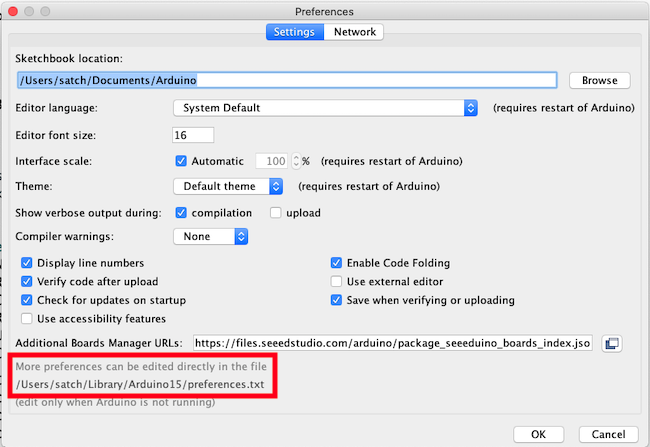 Close the Arduino IDE. Then, open the preferences.txt file and add a build.path line to a location of your choosing:

Save the file, and reopen the Arduino IDE.

Overview of the Host DFU Process

At a high-level, the host firmware update process consists of the following steps:

The first step in enabling Host DFU on a device is adding update capabilities to the baseline firmware, including:

Example project code has been omitted from the snippets below for clarity.

In order for Notehub to properly manage updates, the host firmware needs to provide metadata that Notehub can extract from an uploaded binary. The example project includes a number of definitions in the main .ino file that are used to serve version information to Notehub. At a minimum, the PRODUCT_DISPLAY_NAME, PRODUCT_FIRMWARE_ID, PRODUCT_MAJOR, PRODUCT_MINOR, and PRODUCT_PATCH should be set.

After specifying version metadata, the example project next includes a dfu.status request in the setup function, just after the initial hub.set to configure the ProductUID, mode and sync periods. This request calls the firmwareVersion() function above to include the full firmware version JSON to in the next Notehub sync.

When flashed to a device, the output on the debug console looks like this:

In addition to adding version information is in place, reporting the current version through dfu.status, an ESP32 Host must include functionality to poll the Notecard for firmware, transfer the firmware binary from the Notecard, and use esp-idf utilities to perform the firmware update. The dfu.cpp file in the example project directory contains all of the functionality needed and can be easily modified to be used with any ESP32 project. This section covers the Notecard-specific features of that file. ESP OTA features are out of scope for this guide, but you can learn more about them in the Espressif docs.

First, the example project performs a DFU partition check in the setup function by calling dfuShowPartitions() in dfu.cpp. This function verifies that the ESP32 device is configured with two partitions and logs the result to the debug console. If everything is configured correctly in the Arduino IDE (as referenced above), a message like the following appears in the debug console:

Next, the application calls the dfuPoll() function on a periodic basis. In the example firmware, polling is implemented using button-presses from the Notecarrier-AF's built-in B0 button. When the button is idle (meaning it has not been pressed), dfuPoll(false) is called, which ensures that DFU status checks happen at least hourly. Alternatively, the user can force a DFU status check by double-clicking the B0 button, which calls dfuPoll(true).

The dfuPoll() function contains the bulk of the functionality for interacting with the Notecard and performing firmware updates to the ESP32. Provided this function is called periodically, it will work, as-is, in any ESP32 application.

At a high-level, dfuPoll() performs the following actions:

Once dfu.cpp is added to your project and dfuPoll() is implemented in your loop,

The result of adding dfu.cpp and dfuPoll() to the loop is the following in the debug console, indicating that the host is ready for future firmware updates:

After the host firmware is configured for Host DFU, a revision to the project can be made. At a minimum, any revision should increment one of the PRODUCT_ version definitions for each update, in addition to modifying the functionality of the app.

For instance, in the example project the loop contains code that obtains the temperature and voltage from the Notecard and adds those values to a Notefile through a note.add request.

In the example project, the next revision, adds another request to read from the Notecard's built-in accelerometer using card.motion and includes the orientation in the note.add request.

And the version is bumped to 1.1.0.0 by changing the PRODUCT_MINOR definition.

When making ESP32 firmware changes for DFU, you'll click the Verify button in the Arduino IDE to compile your code and create a binary in the temporary location you specified earlier. Open that directory and look for the file with a bin extension. That's the file that should be uploaded to Notehub for DFU.

Initiating a Host DFU from Notehub

The process of initiating a Host DFU in Notehub consists of two steps:

After you have a firmware binary, open your project in Notehub and navigate to the Settings > Firmware screen. Make sure the "Host Firmware" tab is selected and click on the "Upload firmware" link.

On the Upload screen, select the firmware file created by the Arduino IDE, and add optional Notes about the update, or any other required metadata. 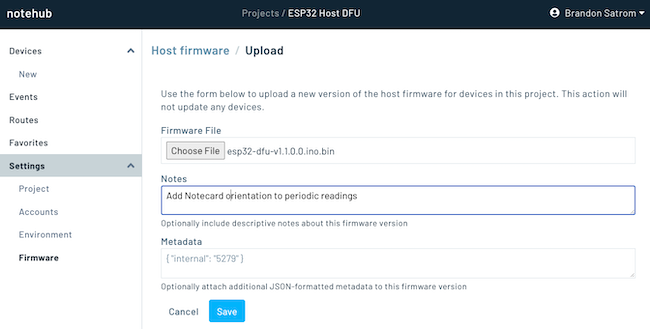 Once you click Save, Notehub will extract the version information and other metadata and return you to the Project Firmware screen, which displays summary information for each of a Project's uploaded binaries. 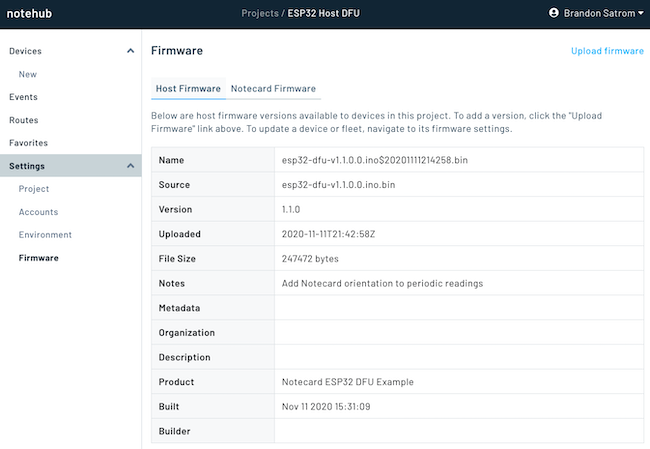 Applying a Firmware Update to a Device or Fleet

After uploading new firmware to your Project, click on the Devices menu item or select a Fleet in the left navigation. Select the Device or Devices you wish to update and click on the Host Firmware tab. Then, click the Update menu item.

Click the option button next to the firmware you wish to send to the Host and click Apply. 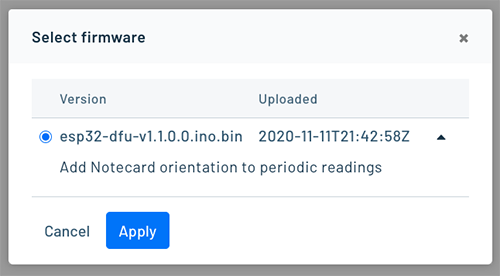 The Device screen will update to indicate that you've requested an update and will display the requested version.

On the next sync, the Notecard is be informed that a new host binary is available and will begin downloading it without interfering with its normal operations. During the download, the Notehub Device screen will update with download progress.

Once the binary is downloaded, the DFU Status changes to "Ready to install firmware."

After the Notecard has completely downloaded the firmware binary, it will inform the host that a DFU image is ready on the next dfu.status request. If you are connected to the ESP32 over a debug console, you'll see a request and response like this:

As the Notecard provides the binary to the host, you can monitor the result of each dfu.get request.

Once the transfer completes and the update is applied, you'll see some additional log messages before the host reboots and the new firmware starts running:

Any new functionality applied to your host will be available immediately upon restart. In the example project, the Notecard orientation was added to note.add requests, which you can verify by clicking the B0 button on the Notecarrier-AF and viewing the request in the debug console.

Finally, in Notehub, once a host DFU is complete for a device, the DFU Status updates to "Completed."